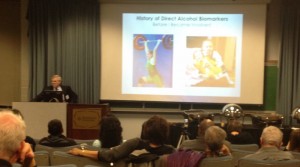 Title:  The Development of Direct Alcohol Bio-Markers and Chromatographic Separations

Abstract:   Direct alcohol bio-markers, compounds that incorporate ethanol into other biological entities, have become valuable players in the determination of past alcohol exposure due to their longer biological half-lives in the human body. The identification and quantitation of two of these molecules, Ethyl Glucuronide (EtG) and Phosphtidylethanol (PEth) are interesting stories of the use of various chromatographic techniques that were employed and ultimately lead to the validation of the use of these markers. As a result, today’s short term (3 day), mid term (3 week), and long term (3 month) interpretational windows are available both to clinicians and to forensic practitioners. The use of chromatographic techniques will be discussed in the history of the development of these modern markers.

Bio:  Douglas Lewis, President and Scientific Director
Douglas Lewis is the founder, president and scientific director of United States Drug Testing Laboratories, Inc. (USDTL) where he oversees development of new matrices for use in diagnosing substances of abuse, such as: umbilical cord tissue used to determine substance exposure in newborns, and fingernails to determine alcohol biomarkers and substances of abuse.

Prior to USDTL, he spent five years in academia as an assistant professor of clinical pathology at Northwestern University Medical School while also serving as the head of the toxicology section at the Children’s Memorial Hospital in Chicago. During his tenure at Northwestern and Children’s, Lewis established the first non-Olympic anabolic steroids testing laboratory in the United States and was a toxicologist for the U.S. Weight Lifting Federation.